Persecution: Where Does It Come From? 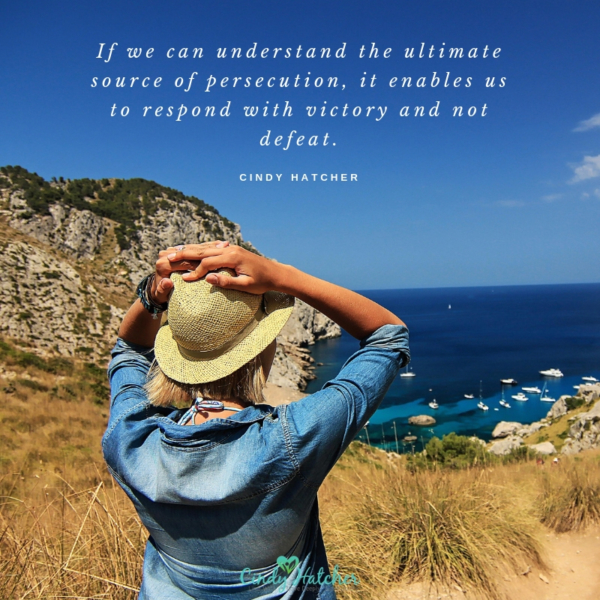 We all love an underdog story – a Cinderella story – where someone climbs to the top, overcoming all kinds of circumstances.  We love that!  And, when we’re watching a sports event – we secretly do not cheer for the team or person who is the ten-time champion – the ones that have been on a roll for ten years or whatever.  We’re saying, “Where’s the underdog that’s going to topple these people?”  And when that underdog shows up, we’re all rooting for him or her!

As believers, our struggles and suffering often are the result of persecution.  We have lots of victories, and we will celebrate the victory.  But we need to recognize that anytime you do ministry like that, there are going to be a few rejections.  You can expect persecution from one source or another.  Nobody likes rejection!  We want to be loved, we want to be accepted, we want to belong – that is our human nature.

That’s why I want to talk about the source of persecution – and here I mean suffering or rejection that comes about because we are Christian, specifically Christians making a difference in the Kingdom of God.  If we can understand the ultimate source of persecution, it enables us to respond with victory and not defeat.

So, where does persecution come from?

Persecution can come from governments and from extremists in other religions.  The ministry of “Voice of the Martyrs” shares the urgent prayer needs of Christians around the world who suffer persecution, usually in countries in Asia or the Middle East or North Africa, countries driven by atheism or by other religions like Islam or Hinduism.  Yet even in the United States, we are seeing an increase in cases where churches and Christian schools and Christian businesses are under attack.

And, admittedly, Christians aren’t the only ones victimized by religious or ideological extremists, as we’ve recently seen with at least 50 Muslims shot down in their mosque in Christchurch, New Zealand.  Even if they aren’t followers of Jesus, those who were praying in the mosque were made in the image of God and are lost sons and daughters of God, even if they aren’t aware of it. Tragedy can strike anywhere and anytime.

In Acts 13:50 we read, “But the Jewish leaders incited the God-fearing women of high standing and the leading men of the city. They stirred up persecution against Paul and Barnabas, and expelled them from their region.”

That really jumped out at me.  Usually any move, any shift of God in the history of the church – anytime there was a charismatic renewal – the persecution never came from the world – it came from the God-fearing men and women.  They were the ones conducting the most ferocious attacks on other believers.

And that’s the hard thing about persecution.  It’s like Jesus being betrayed by Judas, someone who could kiss Him on the cheek.  When persecution comes from the people who are supposed to be your brothers and sisters – who might actually be your brothers and sisters – that’s when it hurts the most.  That’s why so many people in the church – the Body of Christ – hurt because so many of our hurts come from other believers.

Our team was ministering one weekend and seeing amazing miracles and healings.  There was a man who everyone called “Bones” because, in his younger druggie days, he got high at a concert, was climbing the side of a tall building when he fell and landed on both feet, breaking multiple bones in his legs and hips.  He had a collection of plates and screws in his body, and there was a noticeable metal plate that he had for a shin, attached to his knee and ankle with screws.  He had chronic pain from his injuries.

We showed a film from Global Awakening of a girl being healed with metal in her jaw, and afterward, we prayed for healing and three people were healed who had metal in their bodies.  Two of them had screws – one in the hip and the other in the toe.  And then there was Bones!  After prayer, he couldn’t feel the plate anymore nor any of the screws.  His face was priceless – shocked!  We all touched his shin, and I have pictures – it was a normal bone!  Three crazy creative miracles of metal disappearing from people’s bodies!

And then I got a call from one of the team members.  Her mother-in-law heard about this testimony, and she was from a particular denomination, and she basically accused them of being in the occult.  She had no faith whatsoever to believe this could be God because it was just so outside-of-the-box.  So, she decided it must be occult powers at work.

Our team member said, “Well, I guess we’ve arrived…we’ve gone so far that now our family thinks we’re nuts.  We’re doing something right.”  Her Christian relative couldn’t accept that this miracle was from God because it didn’t fit her frame of religious experience.  When some other aspect of God that she had not known Him to be revealed Himself, she didn’t recognize Him.  It’s like the Pharisees and the Sadducees didn’t recognize Jesus.

But, here’s what gets me about that woman thinking that the metal disappearing from the leg had something to do with the occult.  This is a God-fearing woman – a person who says she loves Jesus.  But when a supernatural sign shows up, she thinks it must be the Devil!  Excuse me!  Isn’t God bigger?  Why would we give the enemy credit for that?

We will all go through suffering, but who’s going to persevere?  When the Lord searches the earth, looking for those of faith, will He find you?   If He does, the victor’s crown is yours!

“Do not be afraid of what you are about to suffer.  I tell you, the devil will put some of you in prison to test you, and you will suffer persecution for ten days.  Be faithful, even to the point of death, and I will give you life as your victor’s crown.” (Revelation 2:10 NIV)