See! Advance! Shout! Advancing in the Presence of God 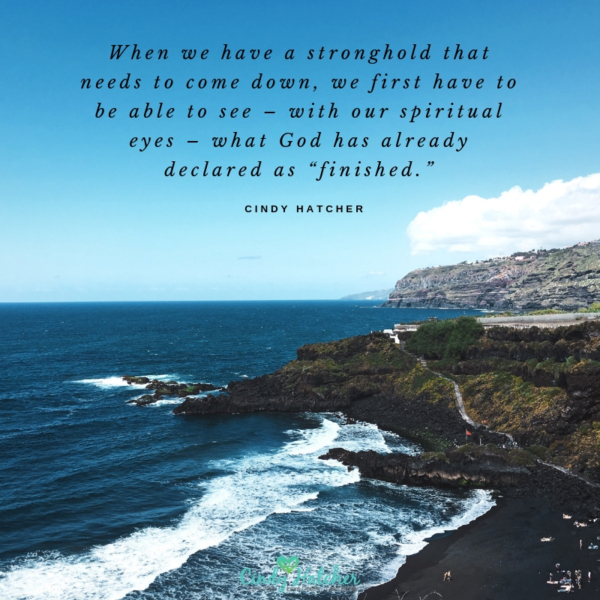 Do you have a stronghold in your life?  Perhaps you need a physical or an emotional healing?  Perhaps there’s some problem that blocking the fullness of life in your marriage, your family, your career or ministry.  Or perhaps the stronghold is in your mind – negative thinking that is preventing you from moving forward – that needs to be taken captive.

Joshua had a literal stronghold – the great fortress city of Jericho.  And God had given him three keywords on how to take the city:  See!  Advance!  Shout!

What did God mean by “see?”

“See!  I have delivered Jericho into your hands, along with its kings and its fighting men.” (Joshua 6:2 NIV)

God was telling Joshua to “see” something that hadn’t happened yet (in the physical).  When we have a stronghold that needs to come down, we first have to be able to see – with our spiritual eyes – what God has already declared as “finished.”

Now, it was time for the next step: advance.

Once Joshua “saw” that the stronghold was already delivered, God next revealed His battle plan – perhaps one of the craziest strategies in history.  Joshua then called his troops together and relayed God’s command to advance:

“So Joshua son of Nun called the priests and said to them, ‘Take up the ark of the covenant of the Lord and have seven priests carry trumpets in front of it.’

And he ordered the army, ‘Advance! March around the city, with an armed guard going ahead of the ark of the Lord.’” (Joshua 6:6-7 NIV)

It’s time for us to advance as well!

How do we advance?

On what occasions would the priests blow the trumpets?  They blew the trumpets in times of celebration, times of victory, times of war, and times of worship.   Blowing the trumpets was an announcement of the Presence of God!  It was blown when going into battle, saying, “You need to be scared – we’re coming – and our God is coming with us!”

As the priests were continually blowing their trumpets, and the multitude was silently marching around the city, behind the Ark of the Covenant, the Israelites were in a state of continuous worship.  They were continually declaring the Presence of God.  It was an announcement!  The Ark of the Covenant meant, “This is our God!  His Presence is here!”

Worship is a powerful weapon for demolishing strongholds!  In Psalm 149:6 we read, “May the praise of God be in their mouths and a double-edged sword in their hands.”  If we want to put shackles on the spiritual forces of evil in the heavenly realms, praise and worship is a powerful tool.

“But Joshua had commanded the army, “Do not give a war cry, do not raise your voices, do not say a word until the day I tell you to shout.” (Joshua 6:10 NIV)

Sometimes you have to keep your mouth shut. This generation that Joshua was leading had learned that.  They had seen their parents die off as they were circling in the desert because they were not allowed to enter into the Promised Land.  Why?  Because they had not kept their mouths shut.  Their parents had grumbled and complained and forgotten God on a regular basis.

Do you know that they left Egypt healthy?  God said, “I’m the Lord your God who healed you.”  There wasn’t a single one of them sick or ailing.  And, they left with the goods.  Remember?  They took all the gold, all the silver from their Egyptian neighbors, and they had herds of cattle and sheep.  God had been providing for them all along the way.  God had provided water from the rock, and God provided manna from Heaven, and they got quail coming out of their noses.  And yet, they complained, and did not trust God, and did not advance and enter the Promised Land when God told them to advance, so they had to wander and die in the wilderness.

God hates grumbling.  You can’t be seated with Christ in heavenly places, looking down at your circumstances, and grumbling at the same time.  Maybe you feel like you’re in a poverty place, but you’re really not – when you’re with the Lord, no matter what.  Our God is our provider – He is able to do above and beyond what we could ever ask or think.

The problem with the Israelites was they had a slave mentality.  Even though the Lord delivered them out of Egypt, they couldn’t leave their slave mentality behind.  God made them wander in the wilderness to kill that slave mentality in them.

And now, Joshua was leading their children – the next generation.  This generation had learned how to hear the Word of the Lord and to obey without grumbling.  To say, “Yes Sir!” when God told them to advance.  Now, as they marched around Jericho, they were obediently silent, other than the trumpets.

Too many times, as believers, we are held back by a slave mentality.  Hear me – your old man – that slave – was co-crucified with Christ.  The old has gone, and the new has come.   You’ve been raised with Him – you are now a son or a daughter!  Your old nature was crucified.  That’s what Jesus paid for.

Now, Jesus is working on your sonship – on your new identity.  He’s working on who He declares you to be.  He’s growing your new nature, not your old nature.  He didn’t want to just clean up the old nature – He wanted to kill it – and He did that on the cross.  When you said “yes” to Him, you died.  “I no longer live, but Christ lives in me.”  (Galatians 2:20 NIV)

So now, it’s time to advance!  It’s time to move forward in the Presence of God – in obedience and in worship and in trusting in God’s provision.  It’s time to leave our slave mentality behind, to claim our sonship, and advance against that stronghold as victors!  The battle is already won!