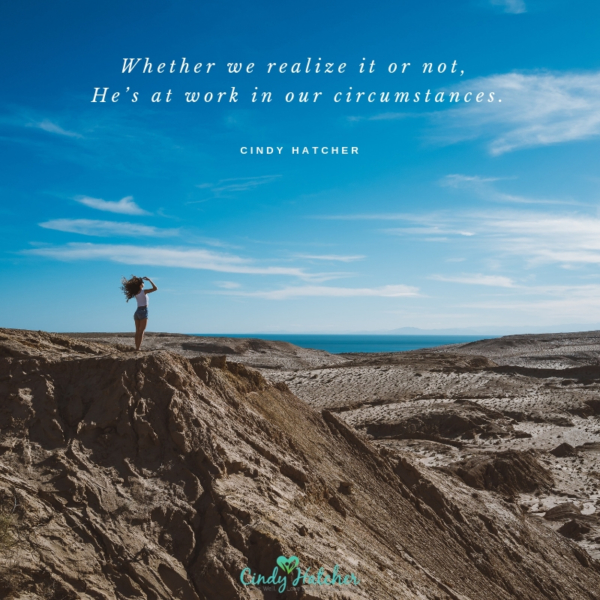 Something’s been stirring in my spirit about those times when we’re sort of hovering in the same place.    Do you ever feel like you’re sort of circling around the mountain – going through the same thing over and over, and not seeming to get results? It’s frustrating, isn’t it?

I think the Lord wants to highlight times and seasons of transition for us – to help us to see that He’s doing a new thing – not an old thing.  Sometimes, as we walk with the Lord, we may feel like we’re going backward, but we’re actually moving forward. He heals in layers and levels.  Whether we realize it or not (we tend to look at things in the natural, and not with our spiritual eyes), He’s at work in our circumstances.

Sometimes we may think nothing’s happening, or that God isn’t moving because He’s not doing it the way we expect Him to do it.  But, He’s always doing a new thing.  He’s Creator.  He doesn’t really repeat Himself very often.  He’s quite creative – He comes up with new ways of doing things.

With this in mind, I want us to look at an old story from the Bible, and I’m going to ask that the Lord helps us see this story with fresh eyes. I feel like there’s a word in this story for those of you who feel like you’re in a season of hovering – when you feel like the airplane that’s circling the airport, waiting for clearance to land.

Sometimes God uses seasons of “hovering” to position us

The story that I want us to jump into is in Joshua 6 – the story of Jericho.  But first, I just want to remind you of where Israel has been before this story begins.  They had been in captivity in Egypt — but backing up even further, I think of Joseph.  Through a series of circumstances that weren’t especially pleasant for Joseph, he was able to come through as Pharoah’s right-hand man and deliver Egypt from a seven-year famine.  Joseph had gone through his seasons of “hovering,” first as a slave to Potiphar, and then during years in prison.  Now, God had him in a position to rescue both Egypt and his own family – the tribe of Israel.

God was preparing Joshua through seasons of being a secondary character

Israel ended up in captivity, after Pharoah died, as slaves in Egypt.  Then, Moses came on the scene, and God delivered Israel in the Exodus.  And through this time, Joshua was Moses’, right-hand man.  When Moses went into the tent of meeting to be with the Lord, in His glory and His presence, Joshua went with him.  Moses would later come out of the tent and take the Word to the people, but Joshua stayed in the tent – he stayed in the Presence of God in the Tabernacle.

So, Joshua served Moses, and he was the strategist – he was the leader of the army for Moses.  And now, he was the leader of the next generation – the one to take Israel into the Promised Land.  It was time to conquer the great city of Jericho.  And God had encouraged Joshua, (in one of my favorite verses), saying, “Be strong and courageous, I will go with you wherever you go – do not fear” (Joshua 1:9 NIV).

God directs Joshua to “see” something that hadn’t happened yet

Now the gates of Jericho were securely barred because of the Israelites. No one went out and no one came in. Then the Lord said to Joshua, “See! I have delivered Jericho into your hands, along with its king and its fighting men.” (Joshua 6:1-2, NIV)

Now I want you to pause here for a moment.  What does the Lord say to Joshua?  “See!”  Sometimes, we’ve got to see what the Lord is seeing.  We need to ask, “Lord, what are you showing me?  I want to see what You’re seeing, and I want to see it with Your eyes.  I need to see it from Your perspective.”

Just one word – “See!”  And then, “I have delivered Jericho.”  God was telling Joshua, “It’s already done. It is finished!”

And yet, was it done?  In the natural?  Not yet!  The walls were still standing there, the city was still a great fortress, the battle hadn’t even started yet.  But, Jericho was “done” with God.  So, when He gives you a word, and He says, “It is finished, it’s done!” – then that means it is.

We need to see our circumstances the way God sees them.

We need to look at our battles with our spiritual eyes.  Our natural eyes may still see the “great fortress” – the seemingly insurmountable problem or the thing needing healing.  But our spiritual eyes see “It is done!”  “It is finished!”

This reminds me of another story, of the prophet Elisha.  The king of Aram and a great army had surrounded the town of Dothan, where Elisha was living, with the intent of seizing Elisha. Elisha’s servant got up early the next morning and was panicked to see troops, horses and chariots everywhere. He dashed back into Elisha, “What will we do now?”

“Don’t be afraid,” Elisha reassured him.   “There’s more on our side than theirs.”  The servant saw the forces of the adversary.  But Elisha saw something more.  He prayed, “Oh Lord, open his eyes and let him see.”  And God opened the servant’s eyes, and he looked up and saw the hillsides around Elisha filled with horses and chariots of fire (2 Kings 6).

In Isaiah, God says He will open our “blind” eyes – our natural eyes – to see what He sees – freedom from what holds us captive.  Lord, open our eyes and let us see what you see!  Help us to know “there’s more on our side than theirs.”

“I, the Lord, have called you in righteousness; I will take hold of your hand. I will keep you and will make you to be a covenant for the people and a light for the Gentiles, to open eyes that are blind, to free captives from prison and to release from the dungeon those who sit in darkness” (Isaiah 42:6-7, NIV).

We need to see our situation from heavenly places.

We don’t want to be under the circumstances looking up at them.  We need to remember that God has raised us up with Christ and seated us with Him in heavenly places (Ephesians 2:6).

When we are seated with Christ in heavenly places, we look down on our circumstances and our battles, and saying, “You know how big my God is?”

When God is doing a new thing in us – taking us along unfamiliar paths, He says He will guide us.  As we are seated with Him in heavenly places, He will turn the darkness of our natural sight into the light and smooth the way before us.

“I will lead the blind by ways they have not known, along unfamiliar paths I will guide them; I will turn the darkness into light before them and make the rough places smooth.