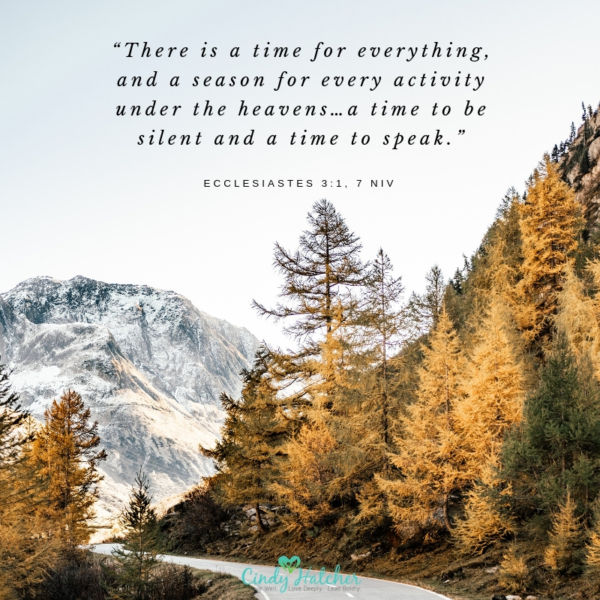 Do you know when to be silent and when to shout from the rooftops?  There are times to keep your mouth shut, and then there are those times to just let it rip!

“There is a time for everything, and a season for every activity under the heavens…a time to be silent and a time to speak.” (Ecclesiastes 3:1, 7 NIV)

A time to be silent…and a time to shout – those were God’s instructions for Joshua and the people of Israel as they faced the great stronghold of Jericho.  We read in Joshua 6 that God had given them three specific directives:  “See!”  “Advance!”  “Shout!”

Regardless of what we may “see” with our physical eyes, God wants us to see what He has declared is done.  Before the battle of Jericho begun, God declared, “I have delivered Jericho.”  Joshua and the Israelites had to see that before it came into being.

“New things I declare.  Before they spring into being, I announce them to you.” (Isaiah 42:9 NIV)

God wanted the Israelites to advance in silence, advance in worship, and advance out of a slave mentality and into a spirit of sonship.  There are times and seasons when God wants us to be silent, to be still, to move forward in a position of rest.

And now, finally, it was time to shout!  Let’s jump into the story in Joshua 6.

So on the second day, they marched around the city once and returned to the camp. They did this for six days.

The seventh time around, when the priests sounded the trumpet blast, Joshua commanded the army, “Shout! For the Lord has given you the city!

…When the trumpets sounded, the army shouted, and at the sound of the trumpet, when the men gave a loud shout, the wall collapsed; so everyone charged straight in, and they took the city.”

When the Israelites operated in obedience – when they listened and obeyed God’s directives for when to be silent and when to shout – the stronghold came down!   If we want victory over those strongholds in our own lives, we need to be sensitive to those times to be silent, and those times when God wants us to shout!

When do we need to be quiet?

When do we need to shout?

Lord, let us know when to be silent.  And let us know when You say, “Shout!”  Let us know how to keep our mouths shut when we need to love those around us and not judge or condemn or correct.  And then teach us when to open our mouths, as we keep our eyes on you and not the enemy, for You are able to do exceedingly abundantly more than we could ever ask or imagine.

I thank You Lord that You’re declaring, “It is finished!”  It’s already done.  And in every season and every circumstance that we’re in, You have a plan and a strategy.  I thank you Lord that You’ve declared us “more than conquerors!”