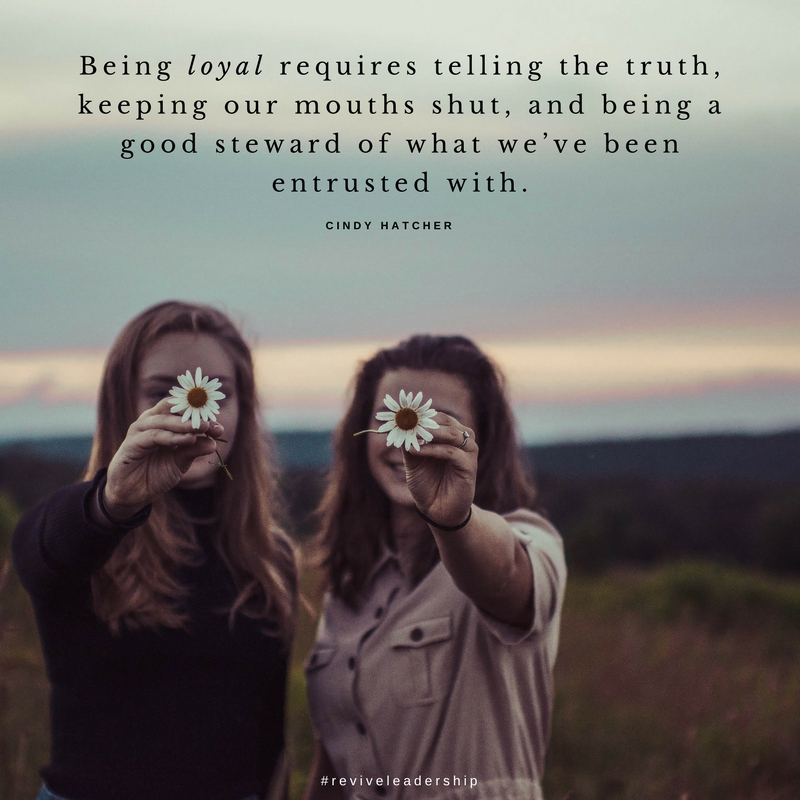 Our loyalty is something that companies are after on a daily basis. Just about every corporation has a customer loyalty program to try to entice us to remain loyal to their products or services. But loyalty didn’t originate in a boardroom or in the mind of man; God came up with the idea. In fact, loyalty is something that characterizes God, and we should strive to be more loyal in our own lives too.

Loyalty and trustworthiness (or being worthy of trust) are closely intertwined. Integrity and faithfulness are similar concepts as well. They make us think of someone whose behavior and actions are consistent over time, especially when it’s hard. You can expect a loyal person to be faithful and true no matter what.

I think we all want to be a loyal partner, friend, or worker, but sometimes things happen that challenge our loyalty such as fear, trials, persecution, or suffering. But instead of letting these things derail our goal to be a trustworthy person, we need to remember that these are the very things that develop the character of loyalty in our lives (Romans 5:4). Remember, the fruit of the Spirit is grown in the soil of adversity.

Scriptures Related to Loyalty and Trustworthiness

The Bible has much to say about loyalty and trustworthiness.

“A trustworthy witness will not lie, but a false witness utters lies. (Proverbs 14:5)

“Many a man proclaims his own loyalty, but who can find a trustworthy man?” (Proverbs 20:6)

“In this case, moreover, it is required of stewards that one be found trustworthy.” (1 Corinthians 4:2)

“He who goes about as a talebearer reveals secrets, but he who is trustworthy conceals a matter. (Proverbs 11:13)

“For I delight in loyalty rather than sacrifice, and in the knowledge of God rather than burnt offerings.” (Hosea 6:6)

Clearly, God values loyalty, and He expects us to be loyal to Him and to others. In fact, He prefers our loyalty over our sacrifices. When we’re trustworthy, we find life and honor. But the truth is, finding a truly trustworthy person isn’t as easy as you’d think. Being loyal requires telling the truth, keeping our mouths shut, and being a good steward of what we’ve been entrusted with.

Perhaps you’re familiar with the story of Ruth in the short book named after her. At the beginning, we meet this non-Jewish woman who married a young Jewish man. Another non-Jewish woman married the man’s brother, and they were all very close with the Jewish parents as well. Unfortunately, the father and sons died, and Naomi, the girls’ mother-in-law, urges them to go back to their parents’ homes and try to find a new husband and to move on with their lives while she returned to her homeland.

The other daughter-in-law finally agreed to leave, but Ruth, understanding the covenant relationship she had with Naomi, her family, and their God, refused to go saying, “Do not urge me to leave you or turn back from following you; for where you go, I will go, and where you lodge, I will lodge. Your people shall be my people, and your God, my God. Where you die, I will die, and there I will be buried. Thus may the Lord do to me, and worse, if anything but death parts you and me” (Ruth 1:16-17).

Ruth had made a covenant with Naomi’s family, and she wasn’t going to break that covenant for anything. Ruth was determined and persistent even though in that culture if you were a widow, you were basically destined to be poor. Ruth could have returned to her parents’ home and found a new husband and moved on with her life, but she refused to leave Naomi, her people, and her God. She was loyal and kept her promise, even though it was difficult.

As the story continues, Ruth went out to the fields to gather leftover food for herself and Naomi, and Boaz (a relative of Naomi’s) saw her and told her to stay in his field where she’d be safe. Boaz had heard of Ruth’s devotion and loyalty to Naomi and was impressed by her character, so he granted her favor and provided for her and Naomi. Ruth was faithful, and Boaz saw that, so he extended loyalty to her.

Eventually, Boaz stepped up as Ruth’s kinsmen redeemer, agreeing to acquire both Naomi’s land and Ruth as his wife, so both women were taken in and cared for; neither were poor, helpless widows any longer. Ruth went on to have a son who would be in the very same lineage as King David and Jesus Christ! Ruth’s unwavering loyalty certainly resulted in honor and goodness in her own life.

Cultivating Loyalty in Our Lives

We are supposed to be covenant people; we have a covenant God. When we said yes to Christ, we made a covenant with Him. And we said, “No matter what, to the point of death, no matter what it costs, I am going to pursue You – and I am yours and you are mine. And I am fully surrendered to You.” Just like Ruth’s loyalty to Naomi, this is the kind of absolute loyalty that God is looking for in His people.

How faithful are you as a friend, worker, or boss? How loyal are you to your spouse? How trustworthy and consistent are you on a daily basis – not just in the big things – but also in the small things? Our behavior and actions should be so clear that people would know us by our love, loyalty, faithfulness, and trustworthiness. These are signs of Christ working in us.

Are you the kind of person that will be faithful and trustworthy? Are you the kind of person who is loyal – you stick through things – you don’t bail on people? When you sign up for something you show up for it – and if you can’t, you call the person? This is a common courtesy that isn’t very common anymore! It’s about integrity and good character. If we are going to grow in Kingdom character and we want to reveal Christ, what would Jesus do? Sometimes it will cost us to be a Christian, but we want to look, smell, act, and react like Jesus anyway.